It has been a busy time for tax-related news and upcoming changes. We have compiled many of the tax changes, deductions and tax rates for easy reference year round. It is more important than ever to plan ahead and review your options to maximize your financial results. Also please visit our side-by-side comparison of 2017 tax law and and the recently enacted "Tax Cuts and Jobs Act."

HIGHLIGHTS OF THE CHANGES AFFECTING 2018

Congress in December of 2017 passed the Tax Cuts and Jobs Act that made sweeping changes to the tax laws. The issues impacting individuals and small businesses are included throughout this pocket tax guide. The following are changes not covered elsewhere in the guide.

Itemized Deductions – Congress made some substantial changes in the area of deductions by almost doubling the standard deduction (shown elsewhere in this guide) while limiting and eliminating portions of the itemized deductions:

Moving Expense Deduction - After 2017, moving expenses and non-taxable employer reimbursement are suspended through 2025. However, the current treatment for moving expenses is allowed to continue for members of the Armed Forces on active duty who move pursuant to a military order.

Child & Dependent Tax Credits - The child tax credit increases in 2018 to $2,000 (up from $1,000) with up to $1,400 being refundable. The earned income threshold is reduced to $2,500 (down from $3,000 in 2017) allowing more taxpayers to qualify for the credit. A child must be under the age of 17 and have a Social Security number issued before the return due date to qualify for credit. In addition a non-refundable tax credit of $500 is available for each non-child dependent that does not qualify for the child tax credit.

Alimony - For divorce agreements entered into after December 31, 2018, alimony won’t be deductible by the payer and won’t be income to the recipient.

Luxury Auto Limits for Business Autos – The Act increased the luxury auto depreciation deduction limits for the 1st, 2nd, 3rd and subsequent years with year 1 increased to $10,000 and year 2 to $16,000.

Deduction for Pass-Through Income - Generally for tax years beginning after Dec. 31, 2017 and before Jan. 1, 2026, the Act adds new Code Sec. 199A, "Qualified Business Income," under which a non-corporate taxpayer, including a trust or estate, who has qualified business income (QBI) from a partnership, S corporation, or sole proprietorship is allowed a deduction for pass-through income for the purpose of computing the taxpayer’s income tax.

HERE ARE SOME HELPFUL TAX RATES AND TABLES TO REFERENCE YEAR-ROUND.  (Bookmark this page for quick reference)

Personal & Dependent Exemption: Not allowed under the new tax law

Standard Deductions are as follows:

*Old age, survivor and disability insurance portion of social security tax.
**Self-employed individuals are allowed to take an income tax deduction for 50% of the self-employment tax.
***Add 0.9% to rate when income exceeds $200,000 ($250,000 for married joint taxpayers, $125,000 if MFS filer)

EARNINGS TEST – SS benefits of an individual who is under the full retirement age (66) are reduced when earnings from working exceed: $17,040/yr.

TAXATION THRESHOLDS – A certain % of an individual’s SS benefits are taxed when his or her provisional income* exceeds certain threshold amounts:

*Provisional income generally includes adjusted gross income plus nontaxable interest plus one-half of social security benefits.
**If married filing separately and lived with spouse at any time during the year, 85% of SS benefits are taxed.

Special rates (capital gain rates) apply to gains attributable to sale of capital assets held for more than a year.

CAPITAL GAIN RATES: The Tax Cuts and Jobs Act altered the regular individual tax rates, which the capital gains rates were previously tied to. So the Act created a separate rate schedule for capital gains tax. The table below illustrates the CG tax rates by filing status and range of income within the filing status.

NETTING SHORT-TERM (ST) AND LONG-TERM (LT) GAINS & LOSSES:
ST gains and losses are netted as are LT gains and losses. Then the two are netted together, with the result being either a net ST or LT gain or loss. Taxpayers, when possible, can achieve a better overall tax benefit by offsetting short-term capital gains with long-term capital losses, thus offsetting higher-taxed
profits with lower-taxed losses.

The maximum deductible amounts of long-term care premiums are based on age and for 2018 are:

The Tax Cuts & Jobs Act altered the way children under age 19 and full time students under age 24 who have unearned income are taxed. For 2018 these children will file their own tax returns with earned income taxed at the single rates and unearned income taxed at the very high tax rates for estates and trusts which hits 37% at income of $12,500. The standard deduction for these children is the greater of the following two amounts but not exceeding the standard deduction for singles ($12,000 in 2018):

Maximum Contribution & Deduction for 2018: $5,500 ($6,500 if age 50 & older) (1) The deduction is ratably phased out for higher income individuals who actively participate in an employer-sponsored plan and/or whose spouse is an active plan participant. The following are the phase-out ranges based on Modified AGI:

Contributions must be made by the due date of the tax return, NOT including extensions. Contributions are NOT allowed upon reaching age 70.5 (however contributions to SEP IRAs are allowed after age 70.5).

There is no tax deduction for contributions to a Roth IRA, there is no tax on qualified distributions, and the accounts benefit from tax-free accumulation. The contributions are ratably phased out for higher income individuals. The following are the phase-out ranges based on Modified AGI:

Contributions must be made by the due date of the tax return, NOT including extensions. Contributions ARE allowed after age 70.5 (must have earned income).
(1) The $5,500 and $6,500 limits apply to the combined Traditional and Roth IRA contributions of the individual for the year.

Source: Collegeboard.org Note: College costs increased at a rate of about 3.5% over the prior period for both public and private institutions.

Three tax plans are provided to save funds for a child’s education. Contributions to them are NOT tax deductible. The tax benefit is the account earnings that accrue tax deferred are free from tax if used for qualified education expenses.

Coverdell Account – The annual contribution limit for 2018 is $2,000 per student. Funds can be used not only for higher education but also for Kindergarten through grade 12. Contributions must be made by the April due date for filing the return. The contribution limit is ratably reduced to zero for Joint filers with MAGI between $190K and $220K and $95K and $110K for others.

Sec 529 Plan – The total contribution per student is only limited by the projected cost of the student’s planned education. The donor’s annual contribution is generally predicated on donor’s gift tax issues. Generally each donor can contribute up to the annual gift tax exclusion ($15,000 in 2018) per year without gift tax implications. In addition the exemption amount for the next four years (total $75,000 in 2018) can be contributed at one time (generally in the earlier years to benefit from increased earnings). Funds can only be used for post-secondary education, except the Tax Cuts & Jobs Act allows up to $10,000 per year to be used for elementary and high school education expenses beginning in 2018.

Savings Bonds – A taxpayer who pays qualified higher education expenses with redemption proceeds from Series EE or I Bonds issued after 1989 may be able to exclude the bonds’ income. To qualify the bonds must have been purchased when the individual was at least age 24 and redeemed at the time of the education expense for the taxpayer, spouse, or dependent. The income exclusion phases out for joint filers with a MAGI between $119,550 and $149,550 ($79,700 and $94,700 for others).

*Reflects rates in effect since 10/1/2017, using the simplified method of determination.

The Tax Cuts & Jobs Act allows 100% unlimited expensing of tangible business assets (except structures) acquired after September 27, 2017 and through 2022. Applies when a taxpayer first uses the asset (can be new or used property). The addition of this provision eliminates the need for Sec 179 expensing until 2023.

Each individual is allowed an annual gift tax exclusion of $15,000 per donee for 2018 (up from the $14,000 that has been in effect since 2013), with no limit to the number of donees. These gifts are not deductible by the giver nor are they taxable to the donee. Gifts in excess of the exclusion must be reported on a gift tax return. Gifts in excess of the exclusion are taxable but are offset with the Unified Estate and Gift Tax Credit until that credit is used up. Any amounts used to offset the gift tax will reduce the amount of credit available for the giver’s estate tax. 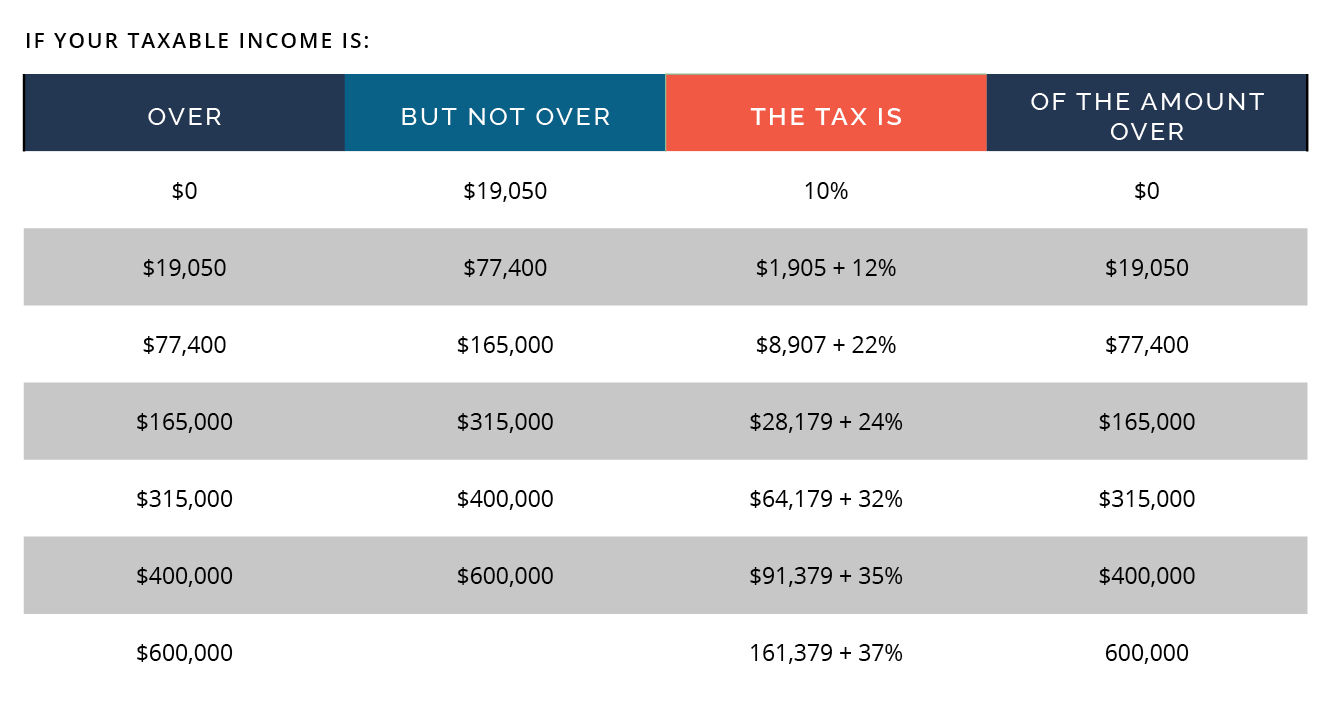 * Married separate (MS) use 1/2 of the joint dollar amounts. 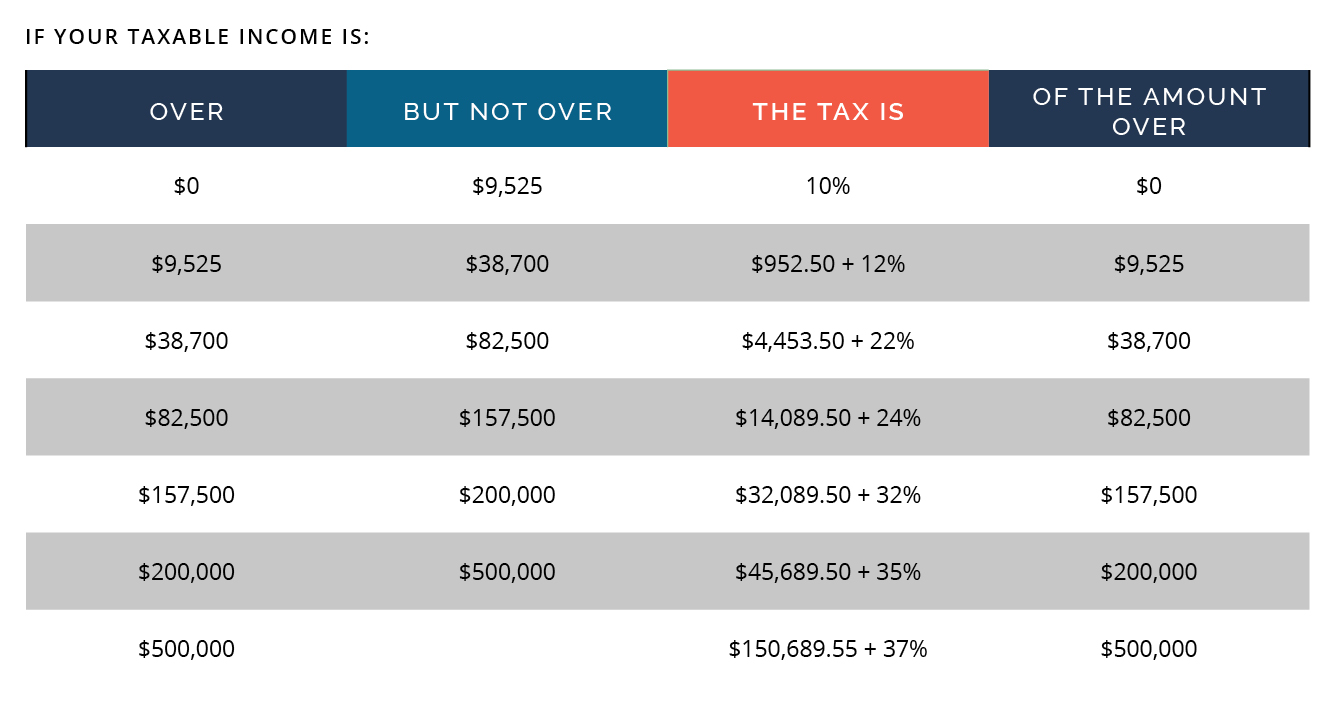 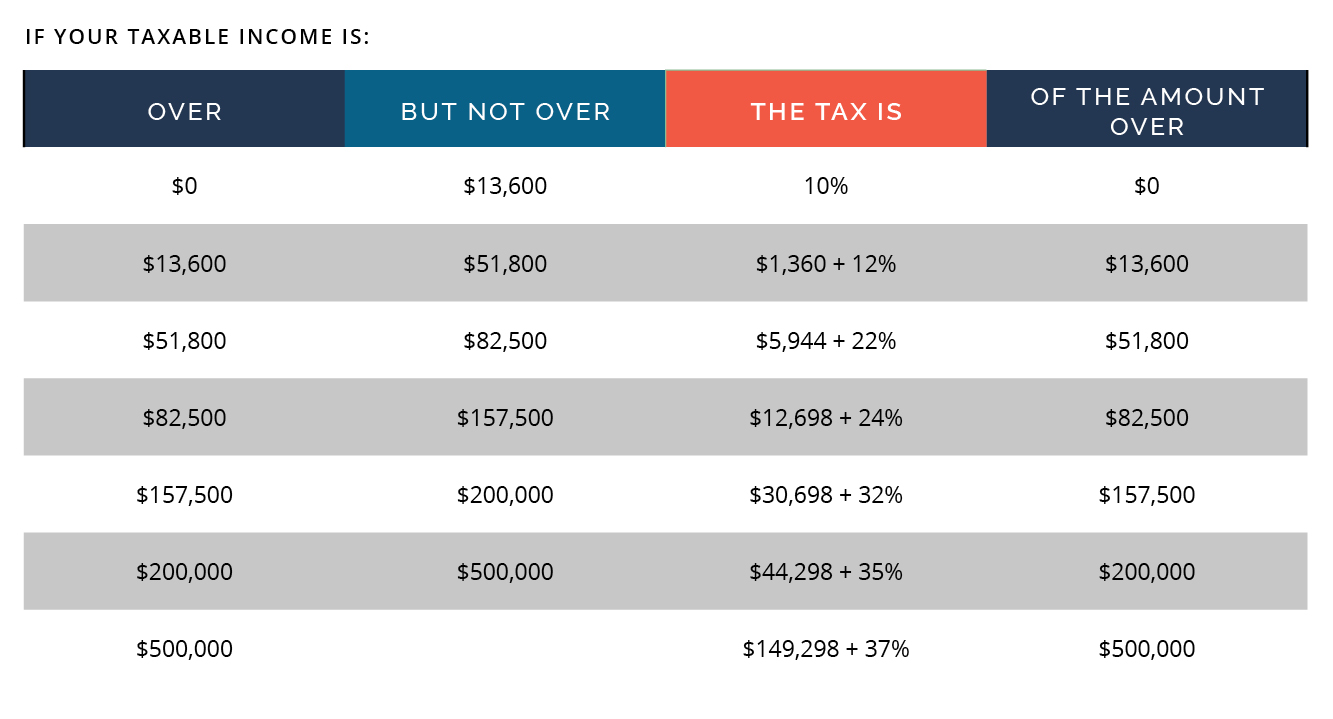 The Tax Cuts & Jobs Act substantially increased both the AMT exemptions and the exemption phase out threshold which will substantially reduce the number of taxpayers affected by the AMT in 2018.

To avoid possible underpayment penalties, taxpayer is required to deposit by withholding or estimated tax payments an amount equal to the lesser of: 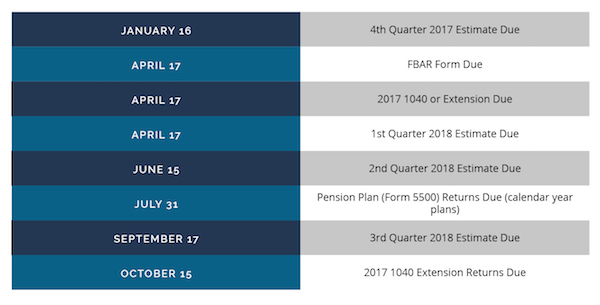 Assume a planned retirement age of 60. Based on average statistics, you will need to accumulate retirement assets by age 60 to last for 24.2 yrs.
* Life expectancy rates based on the IRS Unisex Single Life Tables. 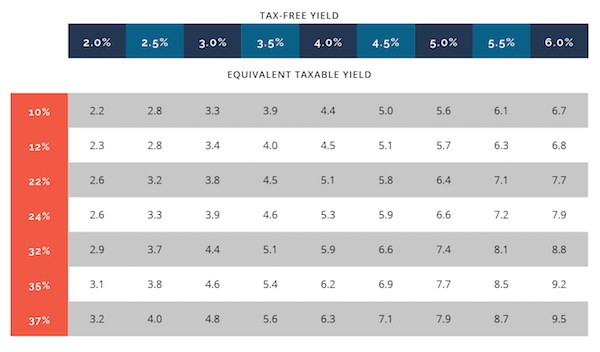 Example: A taxpayer in the 24% tax bracket would have to purchase a taxable investment yielding more than 3.3% to outperform a 2.5% tax-free investment.

The information provided is an abbreviated summary of tax and financial information for the 2018 tax year and only includes law changes through December 2017. Pending or future tax legislation and regulations could alter contents of this brochure. The accuracy and completeness of this information is not guaranteed. Specific questions relating to your specific tax or financial situation should be directed to your tax and financial advisor.

Latest from Our Blog

Help us. Help others.

Tell us about your experience with our firm.